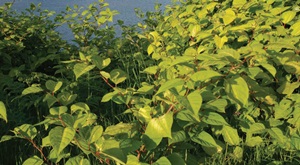 Kieran Cummins, environmental law specialist, details the legal issues surrounding invasive species in Ireland and the implications it has for your business.

Of note to the horticultural sector are sections 49 and 50. Not since the introduction of the Noxious Weeds Act [1936] and various regulations associated with that Act, have law makers directed their attention to specific species. It is fair to say that the latest initiative has largely been as a result of Ireland’s membership of the EU and the various habitats and related directives. Many of the plants, which are now considered to be invasive, were in the past sold as ornamental plants or as oxygenator plants for garden ponds. Unfortunately, having escaped from their cultivated environs, they have caused significant problems to the surrounding countryside.

Some 35 species are then listed in the third schedule to these regulations, while a number of animals are listed separately. Schedule three also specifies a prohibition on the movement of vector material with specific reference to “soil or spoil taken from places infested with Japanese knotweed (Fallopia japonica), giant knotweed (Fallopia sachalinensis) or their hybrid Bohemian knotweed (Fallopia x bohemica)”.

Section 49 provides that (save in accordance with a licence), “any person who plants, disperses, allows or causes to disperse, spreads or otherwise causes to grow in any place specified in relation to such plant in … the Third Schedule, … shall be guilty of an offence.” Section 49 also provides for a defence (if it can be proven) that the accused took “all reasonable steps and exercised all due diligence to avoid committing the offence”. Additionally, Section 49 provides that if the Minister considers that a species poses a threat to the objectives of the Birds and Habitats Directives, including the protection of European sites, of habitats, and of species of flora and fauna, including birds, he or she may authorise the destruction by appropriate means.

Section 50 has yet to be enacted (as provided for by Section 74). Notwithstanding Section 50 provides that “Save in accordance with a licence … a person shall be guilty of an offence if he or she has in his or her possession for sale, or for the purposes of breeding, reproduction or propagation,

or offers … for sale, transportation, distribution, introduction or release”. Moreover, Section 50 specifies that ”a person shall be guilty of an offence if he or she imports or transports an animal or plant listed in the Third Schedule”.

This also includes ‘a vector material listed in Part 3 of the Third Schedule into the State.

Persons within the sector should also be aware that Section 50 is quite broad in its application in that it includes an offence for any person who publishes or causes to be published, including on the internet, any advertisement, catalogue, circular or price list likely to be understood as conveying that such person imports into the State, buys, sells, distributes or provides for the introduction or release of a species specified in the Third Schedule.

“Section 67 provides that a person found guilty ‘on summary conviction, to a Class A fine or imprisonment for a term not exceeding six months”

The statutory authorities expect Section 50 to be enacted in the final quarter of 2014. In the meantime, risk assessments are been conducted on a series of species. While 35 species are currently listed in the Third Schedule to the regulations, this may be varied when Section 50 is finally implemented autumn 2014. When this is finalised, it is proposed to revisit this and provide a complete listing of the final list. Some species, which are included, are giant hogweed Heracleum mantegazzianum, which is highly dangerous to touch. Also included is Japanese knotweed Fallopia japonica, which has been extremely problematic throughout the State. People might also be interested to know that the Spanish bluebell Hyacinthoides hispanica is also included in the ban. Spanish bluebells are more erect than is not in the Schedule as currently published, though this may change when Section 50 is enacted later this year. The Schedule also includes aquatic species, which were originally introduced as oxygenator plants. For example, species such as curly waterweed Lagarosiphon major and floating pennywort Hydrocotyle ranunculoides are included.

“A person shall be guilty of an offence if he or she has in his or her possession for sale, or for the purposes of breeding, reproduction or propagation, or offers … for sale, transportation, distribution, introduction or release’’ 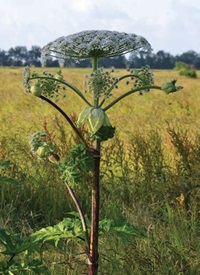 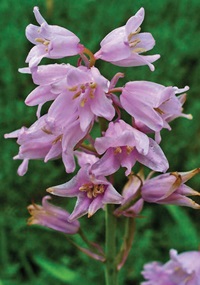 LEFT: HERACLEUM MANTEGAZZIANUM, A GROWING ISSUE IN THE IRISH LANDSCAPE. RIGHT: THE SPANISH BLUEBELL, HYACINTHOIDES HISPANICA IS NOW CONSIDERED AN INVASIVE SPECIES. OPPOSITE PAGE: FALLOPIA JAPONICA, ONE OF THE MOST PERNICIOUS INVASIVE AND A GROWING PROBLEM ALONG IRELAND’S RIVERBANKS, ROADWAYS AND JUST ABOUT ANYWHERE IT CAN GET A FOOTHOLD.

KIERAN CUMMINS, Dip Hort. (Warrenstown), BSc Management and Law, Solicitor: ROI, Solicitor: England and Wales. Kieran is a planning/ environmental law consultant. He is a specialist in EIA (Environmental Impact Assessments), sustainability, policy and the preparation of Planning Submissions. He also provides training courses in the identifi cation, management and control of invasive species, specifi cally tailored for those working in the horticultural sector. Additionally, he is a specialist boxwood grower. www.kierancummins.com